April 27, 2016 By stephenchurchill in Making, Tools of the trade 2 Comments

One option for taking down the thickness of ribs prior to bending is a scraping plane.  I was taught to use a low angle block plane to reduce rib thickness and added a few passes with a Lee Valley Scraping plane for final finishing of ribs.  The is a perfectly valid method and works provided that the plane is super sharp and the cutting depth is kept very small.  The downside is that it’s a slow process if your ribs are thick, due to the need to keep the cutting depth small.  Two ways to improve the amount of material taken with each pass include using a toothed blade or increasing the blade bevel angle.  Another option is a Scraping Plane with a toothed blade set at 70 to 90 degrees, or a York/Pitch plane with a blade set at about 50 degrees.

I have been researching traditional Japanese planes

and became aware of  Sole Flattening planes (Dai Naoshi) which are traditionally used to adjust the soles of wooden Japanese planes.  For the interested, the soles of Japanese wooden planes are not flat, but are relieved in front of the blade and behind the blade leaving three or four contact points.  Also worth noting is the use of tapered laminated steel blades and specially shaped chip breakers in Japanese planes. Traditional Japanese joinery is amazing, check out this video.  For our purposes, the Dai Naoshi form is a useful model for a scraping planes for rib thicknessing and is a tool easily in reach of the construction skills of a violin maker.

While I was pondering a new plane to speed up my rib thicknessing, I saw Davide Sora’s video on rib thicknessing.  He uses a toothing plane with a toothed blade set at about 90 degrees.  Check out his use of the plane here.  Given his success I decided to build one of my own.

Here is my version.  Using separate sides makes it a quick build.  In my design the wedge goes behind the blade, while a wedge is not usually included in Japanese Dai Naoshi because it has a wedge shaped blade, it is necessary here as my blade is flat.  The dimensions of my plane were roughly based on the recommendations of this post. 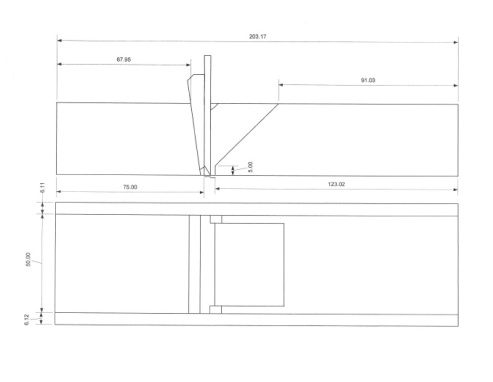 I’ll keep you posted on how well it works.

April 6, 2016 By stephenchurchill in Making, Tools of the trade Leave a comment 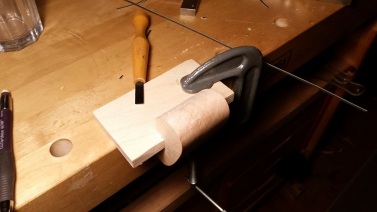 This jig is handy for cutting purfling miters.  The jig is made from a maple block in the shape of a c-bout inserted at an angle into a plywood piece used for clamping the jig to a work bench.  This idea came from Olivia Pelling who taught me violin making while I built my first violin.

I use this along with a small very sharp chisel to set the purfling miter.  After bending the purfling to shape on the bending iron, I mark the beginning and end of the mitre with a pencil and then cut on the curved surface of the jig so that the bend of the purfling is supported.  From there it’s trial and error to adjust the miter cut to remove any gap. 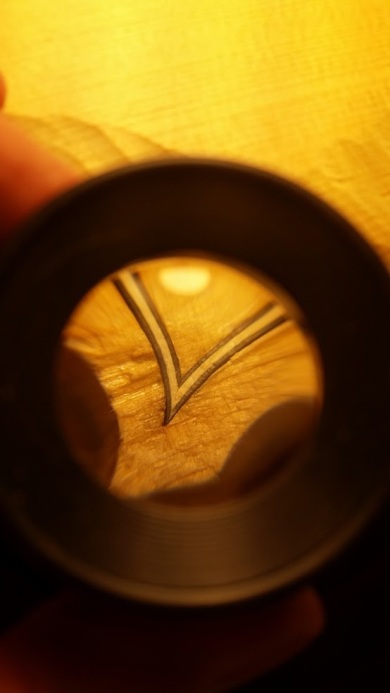 A loop comes in handy to check the result.

Can modern violins sounds as good or better then aged instruments?