September 26, 2017 By stephenchurchill in General Admin Leave a comment

After a quiet summer, I think an update on the 2nd Stainer 1679 is due.  Since last update I’ve assembled the corpus and attached the neck. 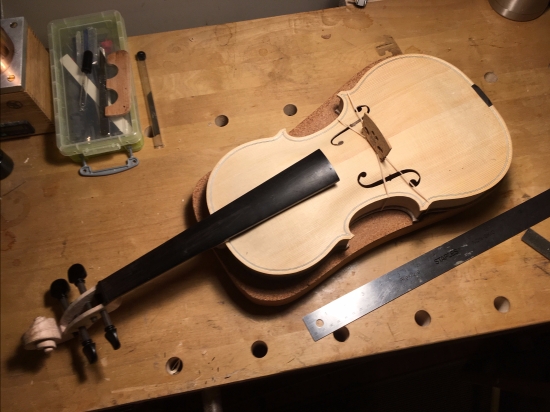 I had planned not to setup the instrument ‘in the white’ but had a change of heart.  So I’ve cleaned up the nut and added a saddle.  As soon as the bridge has been cut I’ll put on some Evah Pirazzi stings and try out the sound.  I’ve been working on some new ground techniques which I’ll be trying out once I”m satisfied no other adjustments need to be made.

September 18, 2017 By stephenchurchill in Links, Tools of the trade Leave a comment

Lee Valley carries some great hand tools.  They’ve had a selection of instrument making tools in the past.   Now they have introduced a special Luthier catalog.   While this short catalog focuses on Guitar Making, there are still some great tools in here for Violin Making and traditional wood working.

Check out the online version here.

Can modern violins sounds as good or better then aged instruments?